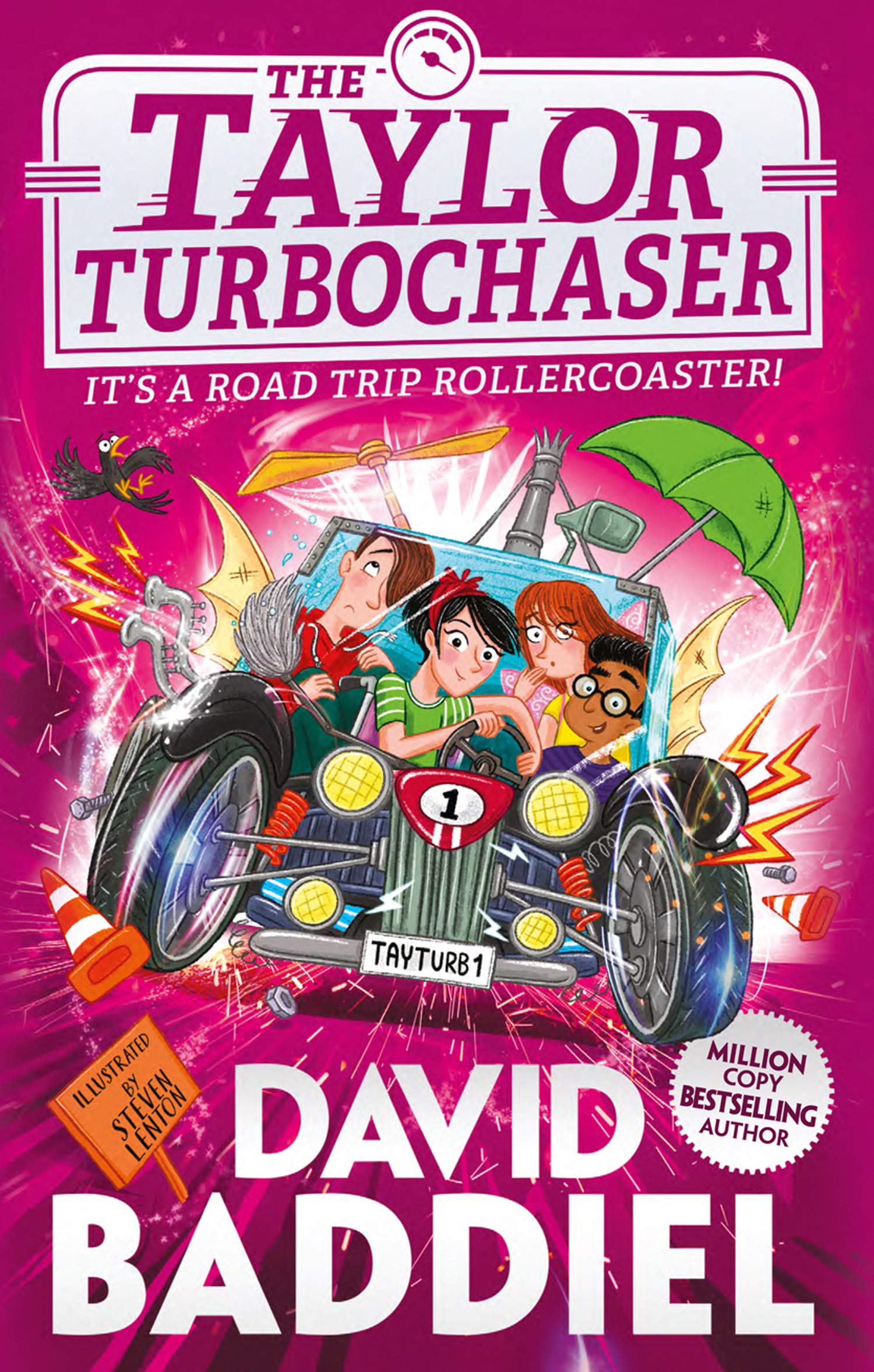 Title: The Taylor Turbochaser Author: David Baddiel Amy wants to become a racing car driver. There is just one small problem. Amy is in a wheelchair due to a car crash when she was younger. Amy’s wheelchair is broken so she gets a new electric wheelchair which was given to her from her divorced Dad who lives in Scotland. One of her friends at school called Rahul, who is an inventor, helps her devise a plan. He will modify her wheelchair to become a car. Amy gives him her new wheelchair and uses her old one. Her mum becomes suspicious about her using her old wheelchair so she asks Amy why she is using it. Amy says she is getting used to her new one but really Rahul us turning the Mobilicon Xr-207 into a supercar. Amy’s wheelchair is finally finished. Amy brings her mum and brother to Rahul’s garage for her mum’s reaction to be “What is that!” It doesn’t even look like a wheelchair. While this was going on, Amy’s brother put the image of it on Snapchat. Then Amy’s dad finds out. He wants it taken apart in 3 days or he will get it taken away…. 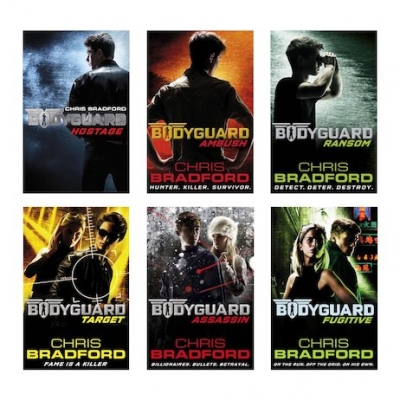 Title: Bodyguard: Hostage Author: Chris Bradford This book is about a boy called Connor Reeves. Connor’s dad was a secret bodyguard from the SAS. One tragic day when he was protecting the US Ambassador in Iraq they were ambushed and Connor’s Father died whilst also saving the Ambassador. A few years later Connor found out he was the UK boxing champion. He thought it was a shame that his Dad (who he thought was dead whilst being in the Army) wasn’t able to see him when he won. When he left, he saw a fight in an alleyway so he intervened and everyone ran away. The police then arrived and took him away as it looked like he had beaten up all the people. They then took him to BuddyGuard HQ and he started his Bodyguard training. He was quickly sent to America to Protect the President’s daughter whilst he is there, he discovers a big secret… his dad died saving the President when the President was the American Ambassador. This was a big shock for Connor. Does he protect the President’s daughter successfully? Who is a better Bodyguard Connor or his Dad? Read the book to find out. I… 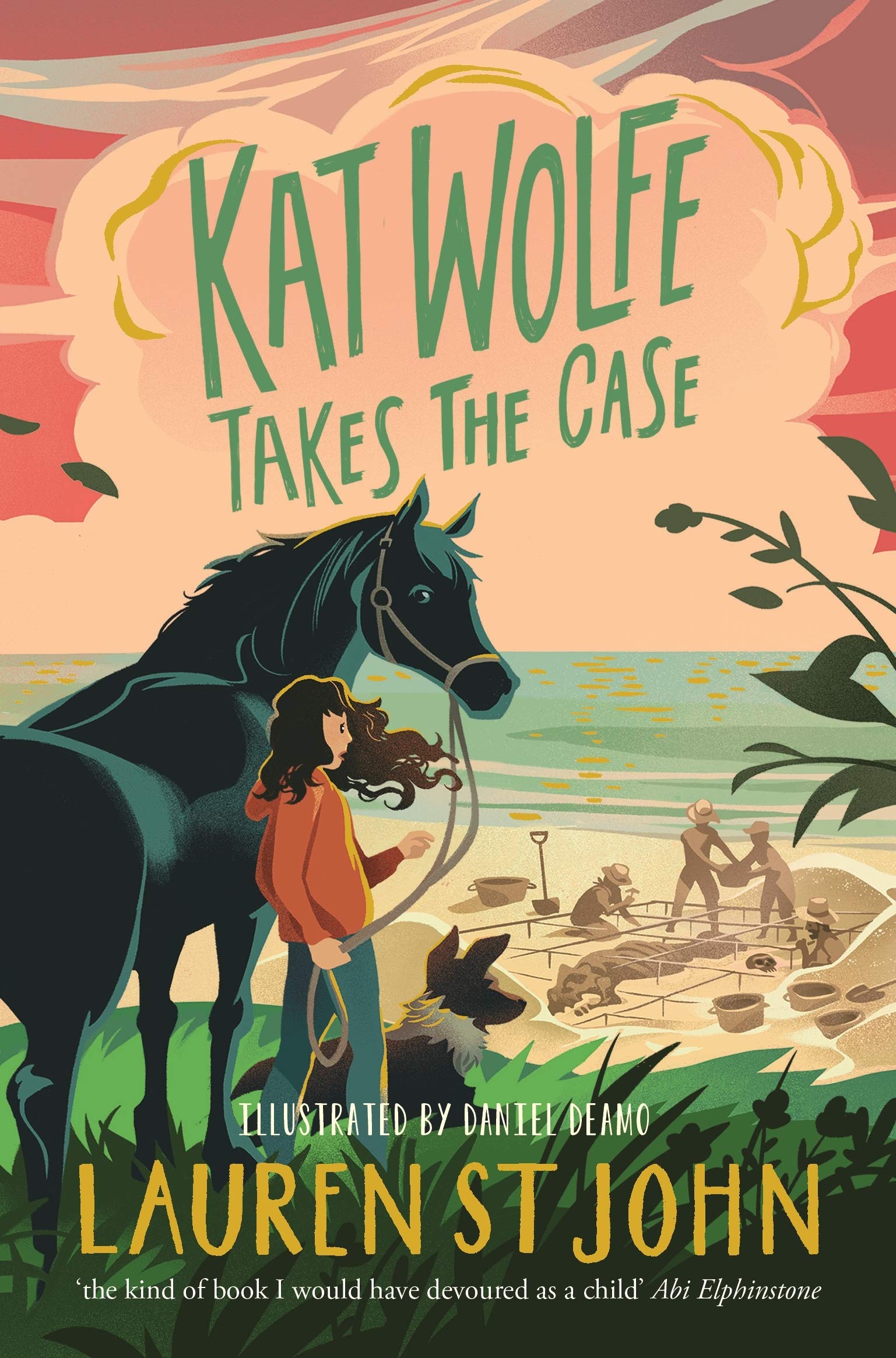 Title: Kat Wolfe Takes the Case Author: Lauren St John Kat Wolfe and Harper Lamb were best friends and they lived on the Jurassic Coast. One day in their quiet town of Bluebell Bay there was a landslide. Harper’s Dad was a palaeologist and after the landslide, he discovered something big… something unimaginable… A “dragon” dinosaur and a dead human’s skull. But what did this all mean? A few days later, Kat and Harper were invited to Kat’s “Granddad’s” (AKA The Dark Lord and the Minister of Defence). That night at his house Kat went outside and saw 2 men fighting on the rooftop and then one of them used “Killer Move 10”, The Leaping Tiger and then the fight ended abruptly. When they got back, they found that someone had tried to steal one of the dragon’s teeth that had been discovered but luckily Kat was clever enough to have left a fake tooth in its place as she knew this might happen. This tooth could be used to make a Chinese medicine which could cure lots of illnesses. Their mission was to find out who stole the tooth and why. Their investigation started here but what did it… 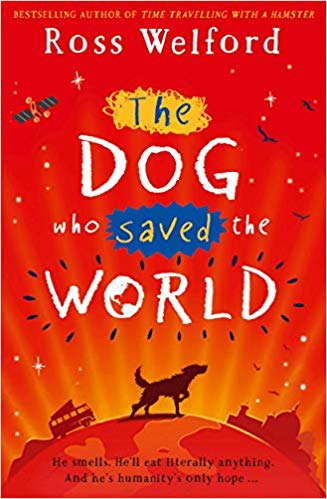 Title: The Dog who saved the World Author: Ross Welford This is the story of Georgie who one day gets a pet dog that is a mix-mash of dog breeds, so she calls him Mr Mash. Mr Nash is quickly returned to the place they get him from because Georgie’s dad gets a new girlfriend and guess what? She is allergic to dogs! Due to Mr Mash leaving, Georgie decides to help out at her local dog home, which just happens to be the place that causes the CBE (Canine Bourne Ebola) disease. One day when she is walking Mr Mash from the dog home, he steals a woman’s yellow swimming hat, so she makes a deal with Georgie: she either helps her or she will report Mr Mash to the authorities! The woman in question is called Dr Pretorius and she has created a machine that lets you experience the future in the present. There is one problem when they are testing it; there is a bug. It is a scorpion! It stings Georgie on the leg which causes her to go to hospital while CBE spreads and nearly kills all the dogs in the world! Georgie now has… 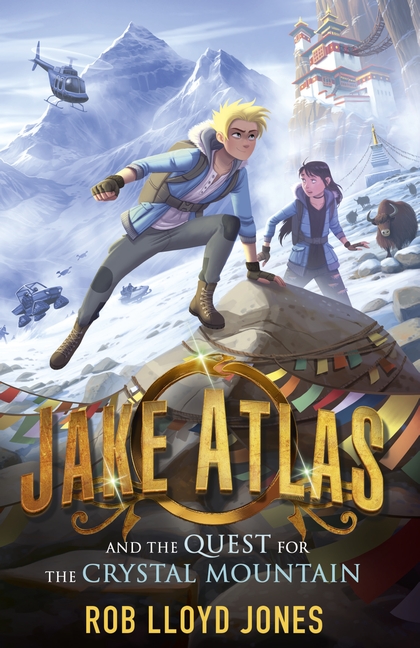 Title: Jake Atlas and the Quest for the Crystal Mountain Author: Rob Lloyd Jones  Do not read this book if you haven’t read book 1 and 2! 🙂  This book is about a boy called Jake and his family who are in Beijing looking for the Emerald Tablet in the tomb of The Terracotta Army. But a lot goes wrong! Let me explain what happens in a few words MASS DESTRUCTION! However, Jake and his family know where to find the next Tablet; on Mount Kailash in Tibet but they must overcome a few problems: You can’t climb Mount Kailash as it is a sacred mountain to the monks They need the Drak Terma to find it but it is guarded by the monks They make their journey to the Crystal Mountain but when they get to Tibet, the monks refuse to show them the Drak Terma because they don’t believe in the Buddhist Gods. So, they need another plan! One that shouldn’t be destructive but it is! 🙂  Do they get the Drak Terma?What happens next?Do they get the Tablet? You’ll have to read this exciting book to find out! I recommend it to 9+ adventure fans and give… 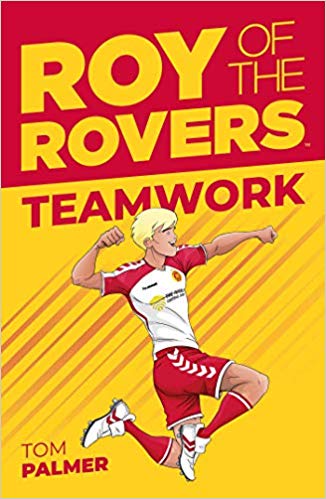 Title: Roy of the Rovers – Teamwork Series: Roy of the Rovers Author: Tom Palmer This book is the 2nd book out of 3 in the Roy of the Rovers series. Read book 1 before this one otherwise it won’t make as much sense. Roy was gutted as he has just lost 2-1 to his rival team, Tynecaster. Hugo, the best player in the world, scored a goal in the last 5 seconds! This was made even worse as Roy had just scored his rocket goal and had nearly made football history. At the end of the match, Hugo tried to swap shirts with Roy but Roy refused and said he was taking it home for his half-paralysed father. He went to college the next day and experienced a bit of fame. He then went to Mel Park and found out he had a Gola boot deal and could make thousands of pounds from it. At home, he got a call from Johnny Dexter (The Rovers’ coach) who asked him to explain a video of him that was going around school. That video could destroy his football career and his reputation. Which brothers were quoted in this book? (CLUE: us!)… 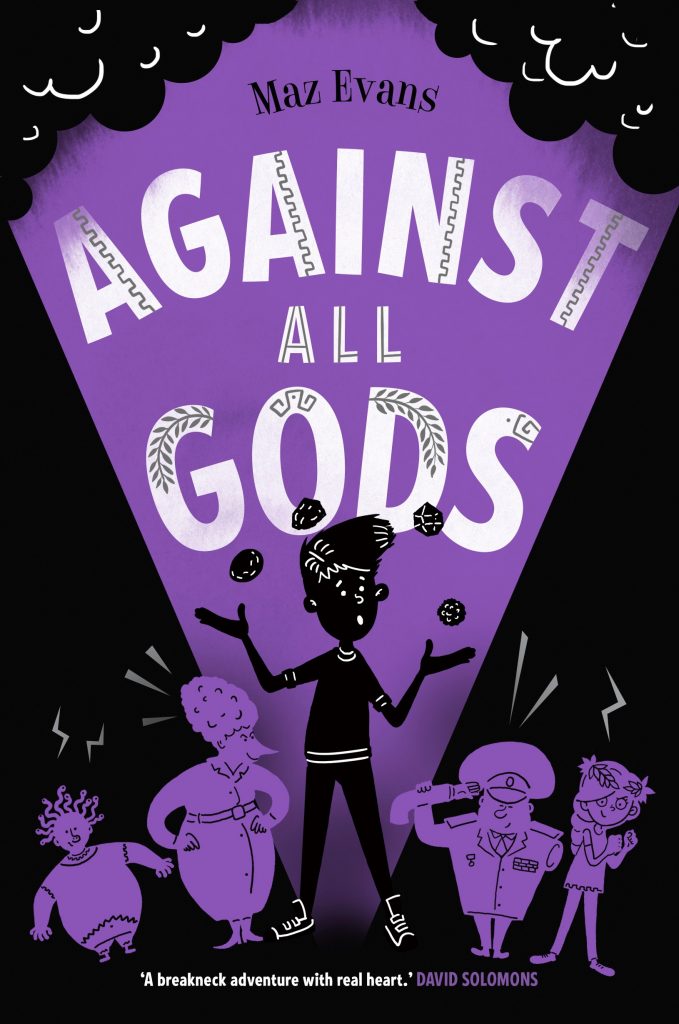 Title: Against all Gods Author: Maz Evans I’ve been waiting AGES for this book to be published so I was so happy when I got a copy! This is the final book in the series. Elliot has a decision to make; get his mum back but lose the Chaos Stones or vice versa. Elliot must then beat Thantos in a war and lock up all his demons. He also needs to get Home Farm back from Mrs Porshley-Plum (AKA Mrs Horse Bum). If Elliot gives Thantos the Chaos Stones there will be real CHAOS and Elliot will be against all Gods. Will he be against all Gods? Does he get Home Farm back? Read the book to find out. I give it 5*****. I love these books and recommend them to ALL readers. Be warned though, you may shed some tears along the way, so get your tissues ready! Remember to read books 1,2 & 3 first! 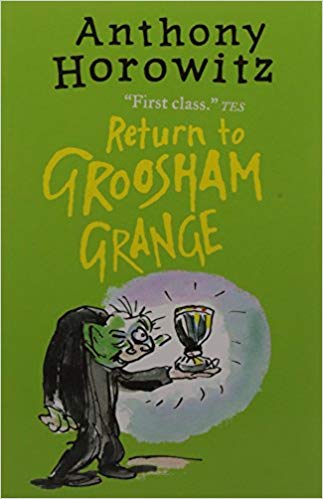 Title: Return to Groosham Grange Author: Anthony Horowitz Do not read this book if you haven’t read book 1 as it will spoil it for you! This book is about a boy called Vincent who works for a secret organisation who plans to shut down Groosham Grange. The way Vincent must shut it down is to get the Unholy Grail. This means beating David, another boy determined to win the Unholy Grail, in a series of challenges and exams. Vincent must then get the Unholy Grail to Canterbury Cathedral to cause Groosham Grange’s foundations to collapse. This will destroy its dark and good magic. It may kill everyone and everything and this could mean that if David loses, he would have to go back to his mean parents’ house; a place worse than hell! I give it 5***** and recommend it to 9+. I couldn’t put this book down! If you love this book, check out Book 1 in this series and don’t forget to read the Alex Rider series. 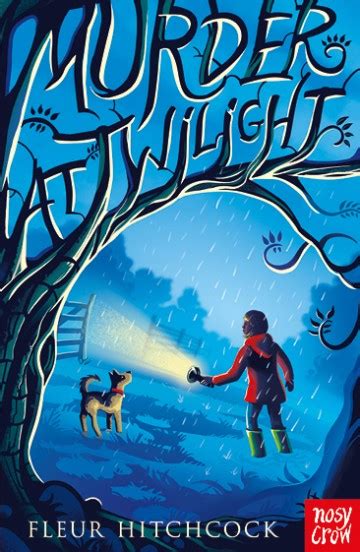 Title: Murder at Twilight Author: Fleur Hitchcock One day an obnoxious boy called Noah went missing. On the morning that he went missing, his “friend” Viv had punched him on the nose while they were in her mum’s car. He had a major nosebleed and there was blood everywhere. Then, Viv’s mum finds herself as the prime suspect for his disappearance and possibly his murder! Later that night, Viv goes out for a walk and gets lost but somehow manages to find Noah locked in a shed. Viv must save Noah before they both die! What they don’t realise is something more dangerous is about to happen and they have to act fast! Who kidnapped Noah? Does he die? If you like mystery books, you’ll love this one. I recommend it to 10+. I give it 10/10. We have just started reading Bus Stop Baby by Fleur Hitchcock and will review it shortly. If you enjoy Murder at Twilight, make sure you read Dear Scarlett. There is a review of it on our website. 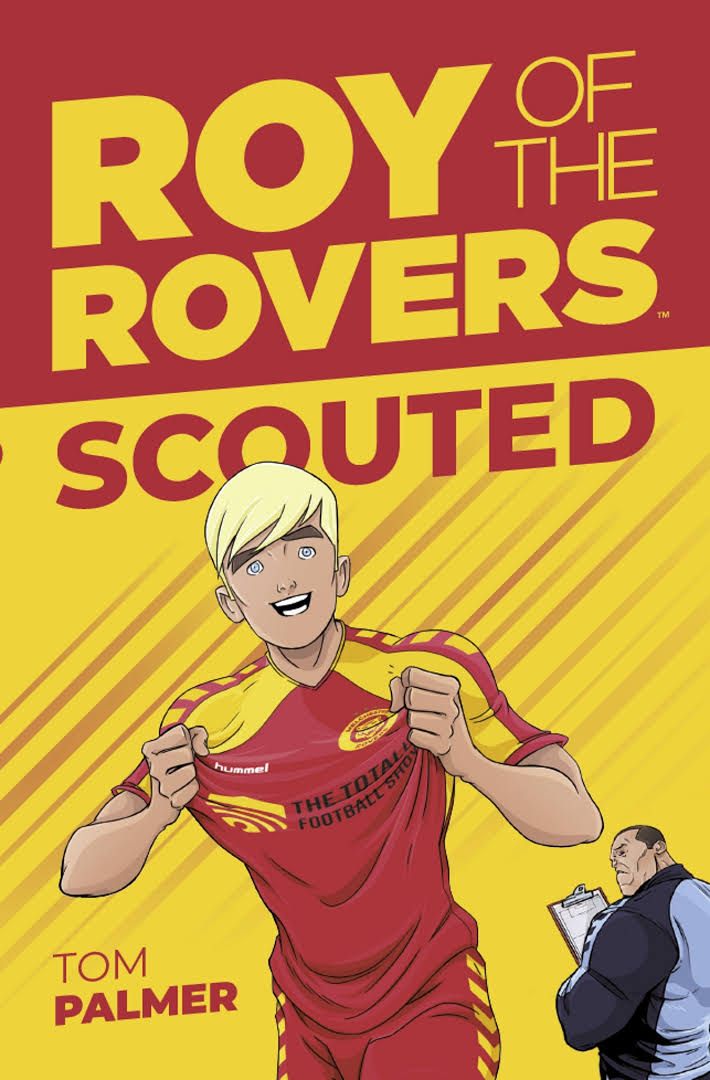 Title: Roy of the Rovers – Scouted Author: Tom Palmer This book is about a boy called Roy. He plays for Grimroyd under 18s; he is 16 years old. Roy plays as a striker and has always been one. Roy and his father have supported their local team, Melchester Rovers for their whole lives. Then Roy has an upcoming match with Grimroyd and guess what? Melchester Rover’s manager is recruiting for new youth players and he is going to see Roy! Does Roy mess up his chance to finally play for his team? Read the book to find out! I give it 5,000,000 stars! I recommend it to 9+ football fans but also non-football fans. I’m not a football fan but I still really enjoyed reading this book. Look out for the graphic novels and the rest of the series. They look amazing. We were also lucky enough to receive the graphic novel called Kick-off by Rob Williams and Ben Willsher and we loved it! Thank you Tom Palmer and Rebellion Publishing for sending us this book. The Book Brothers will always read and review your books!