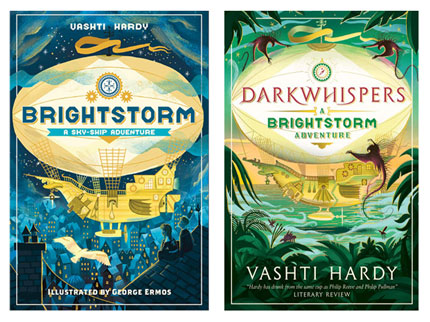 These books are about 2 children called Maudie and Arthur Brightstorm. Their father is an explorer who goes on lots of expeditions around The Wide.

In the first book, their father goes missing on a mission to South Polaris and is accused of a very serious crime by the most praised explorer Eudora Vane. Maudie and Arthur are determined to go to South Polaris to find the truth. They join a crew called The Culpepper Crew, which is led by Harriet Culpepper.

When they arrive, they find something horrible; 13 graves, 1 for each of the crew members. They realise their father was the 14th member of the crew so they raised their hopes that he might have survived. They then continue attempting to get to South Polaris when they eventually find out the truth.

Their father had made it to South Polaris but had died in the process of returning home. Eudora had poisoned the rest of his crew and killed them for a very dark reason.

What is the reason?

Do Maudie and Arthur get home?

Is Eudora punished for her crimes?

In the second book The Culpepper Crew sets off with Maudie and Arthur to find the famous explorer Ermitage Wrigglesworth who is lost in the eastern isles of Stella Oceanus. When Eudora Vane takes an interest in this expedition, Arthur begins to question why. Their suspicions are increased when she steals journals from Wrigglesworth’s house.

What is Eudora Vane after?

Does she find what she wants?

Do Arthur and Maudie catch her before it is too late?

Read the books to find out!

We give these books 5* and recommend them to all readers age 9+ who like adventure and mystery books. We love these books and can’t wait for the next one in the series.