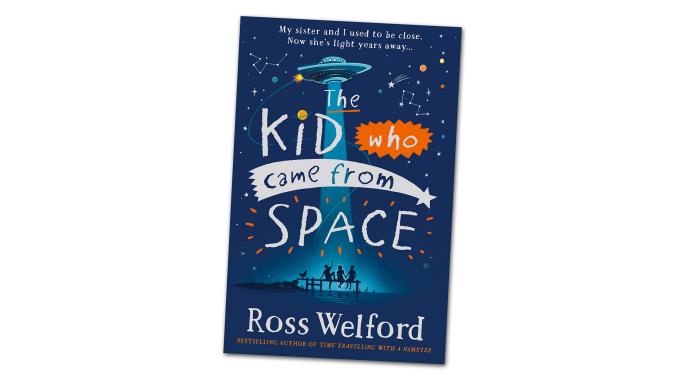 The Kid Who Came From Space
Ross Welford

This book is about a boy called Ethan and his twin sister Tammy. One Christmas Eve, Tammy mysteriously disappears and leaves no evidence of where she has gone. Only her bike remains in the dirt next to the lake. Soon everyone in the small village where she is from is spending their Christmas searching for her. To make her brother feel better, a boy from his school, called Iggy, decides to go fishing with him. But, halfway through, while they are fishing, something very weird happens. It starts with a very low humming noise, and then they start to see a slight dip in the water’s surface. They decide to investigate.

They throw rocks at the invisible object, and they bounce off its surface. So, they get into their canoe to get a closer look. When they get close to the object, the canoe capsizes, and they are thrown into the water. While they are swimming to shore, Iggy gets his leg tied up in a fishing line and cuts it. Once they have detangled him and are out of the water, a mysterious alien appears out of nowhere. She waves a magic stick over his leg and all the blood disappears. The alien, who goes by the name Hellyann, tells Ethan if he ever wants to see his sister again he cannot tell anyone. Then she vanishes.

Two men called Geoff Sr and Geoff Jr, then come down to the pier to investigate as they had seen the whole thing through their telescope. The boys quickly hide, as they do not want the Geoffs to see them. The Geoffs have equipment that is used to detect alien landings and Ethan and Iggy are scared, so they cycle away before the Geoffs and the alien return.

Will they listen to the alien?

Will they tell anyone and will anyone believe them?

Do the Geoffs capture this strange alien creature?

Read the book to find out! We recommend this book to 9+ readers who enjoy a bit of mystery. We give this book 5 ***** and can't wait for another Ross Welford book.