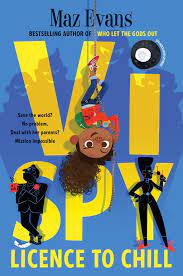 Vi’s mum (Easter Day) is an ex-spy who has spent the past eleven years in retirement in order to protect her daughter from evil. However, as everyone knows Spies are awful at keeping secrets and Vi finds out that her Mum is a spy and wants to follow in her footsteps. One day, when her mum is getting married to George Sprout (who also happens to be Vi's teacher and doesn’t know Easter is a spy) everything starts to go downhill. Vi’s real Dad, who she thought was dead, turns up and cancels the wedding. But why would he do that?

Soon after, Vi finds out that her dad wants to see her more often even though Easter doesn’t think it is a good idea. He used to be known as Sir Charge and used to work with Umbra - the greatest super villain of all time - who had died whilst fighting Easter 10 years earlier.

Vi suddenly decides she wants to see her dad more often as he may be her chance to become a Spy and get into Rimmington Hall (spy school), as he wants her to become a Spy but her mum does not want her to follow her same path and always being in danger. Vi continues to see her Dad and one day after school when he is picking her up, she steals a phone from his car as her mum wouldn’t let her have one! Her mum is overly paranoid that someone can spy on them through it. What she doesn’t realise is that inside that phone is something called the Neurotrol, which can control any adult for 5 minutes… Someone has to steal the Neurotrol Back from Vi, but who?

Does someone steal the Neurotrol back?

Does Vi get into Rimmington Hall?

We give this book 5* and recommend it to 8+ readers who love all types of stories but who really love action. We hope there will be another book in this series.