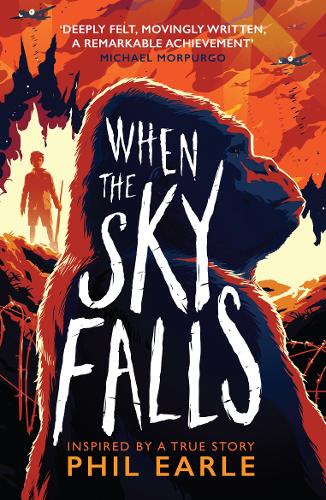 When the Sky Falls
Phil Earle

This book is set during World War 2 and it is about a boy called Joseph. Joseph used to live with his grandma up in Northern England while his dad was away fighting in France. However, his grandmother couldn’t handle his angry behaviour so she sent him away to a woman in London called Mrs F.

When he arrives in London, he doesn’t get off to a good start with Mrs F, like most people he meets. She also took an instant disliking to his behaviour and this causes him to feel isolated. Mrs F forces him to work with her at the local zoo that she owns but he hates it there. There are barely any animals as they were all sent away or killed because of the war.

One day, when he is standing next to one of the cages, he starts hitting the bars with a sudden burst of anger and a gorilla appears and charges at him through the bars. The gorilla is called Adonis and Joseph instantly hates him as he gave him the fright of his life. Later that night Joseph finally experiences an air raid and much to his confusion, he watches Mrs F run towards the danger and point her rifle at her beloved gorilla, who she treats like her baby and who is the pride of her zoo.

Joseph’s life keeps getting worse though especially as he is forced to go to school! He has not been to school for ages as he kept getting expelled. Joseph can’t read, well he can read but the words move around on the page but he doesn’t know why. No one understands this and they all just think that he is lazy and stupid.

Does Joseph’s friendship with Adonis improve?

Does Mrs F finally accept Joseph for who he is?

We give this book 5 stars and recommend it to 10+ readers. We think this book would make an absolutely amazing film!